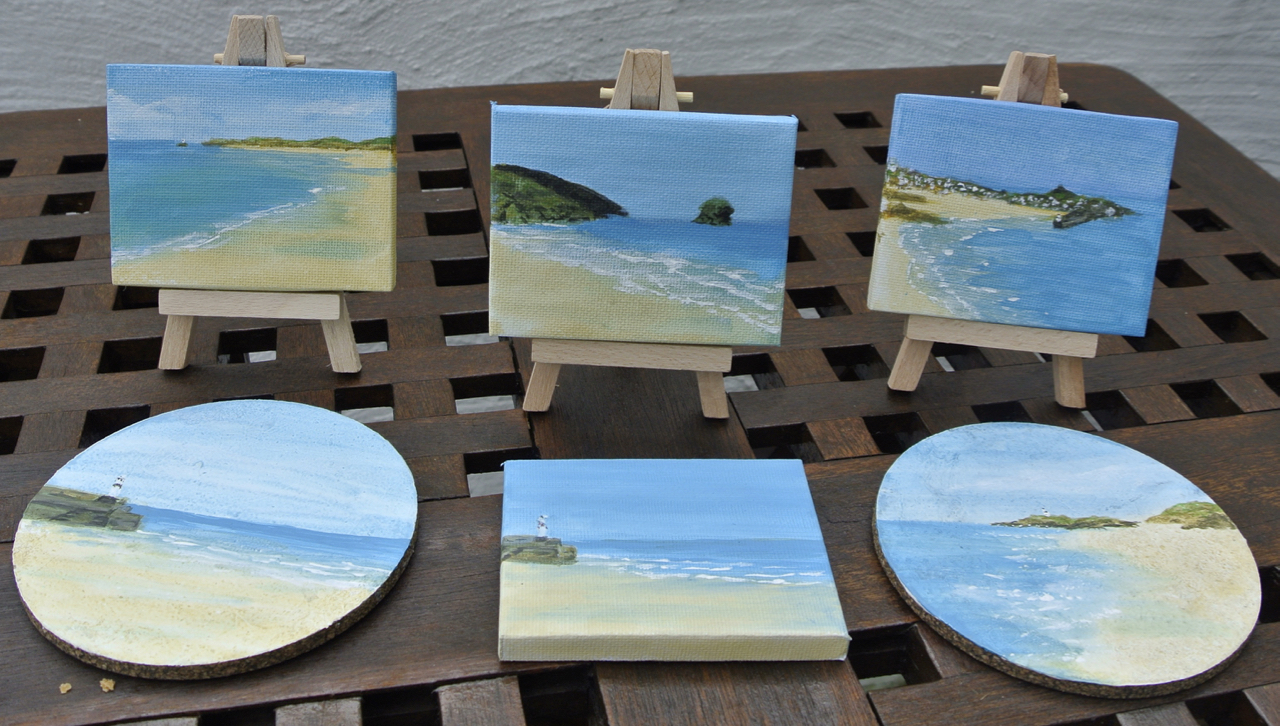 One of the reasons I love my little, miniature acrylic paintings, is that I can paint them relatively quickly! My latest selection are of beaches in Cornwall.

Three of them are my easel paintings, and they include looking from Porth Kidney Sands, across Hayle towards Godrevy; Portreath and also two of St Ives Harbour – one is the view from the bus station looking across to the Harbour and the other is of the Lighthouse that is at the entrance to the Harbour at low tide.

Then I have had fun with my “drinks mats”, one is another painting of the Lighthouse and the other is Godrevy, which I just love painting!

I also experimented with painting on stones! These are very random beach scenes, mainly because the stones are so tiny it is difficult to paint, but I thought they might make nice paperweights!

I used Gesso first to create a surface on which to paint. I quite like them! 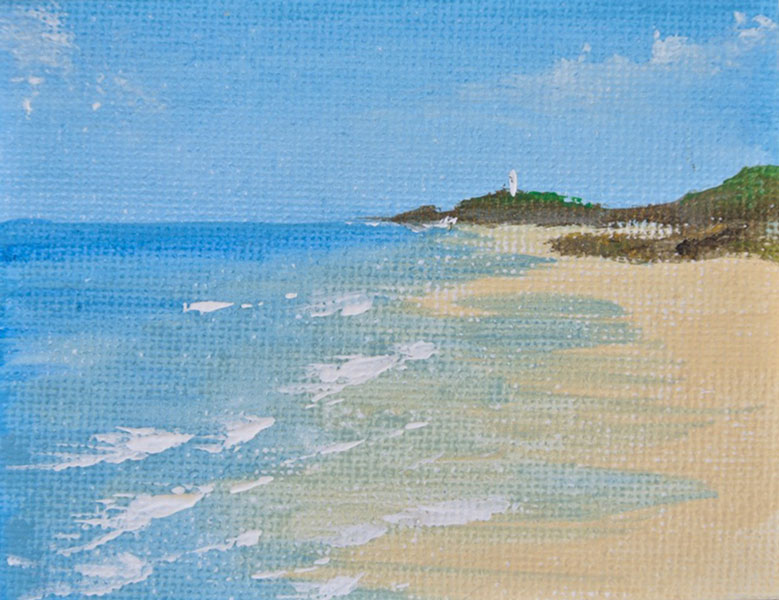 It will come as no surprise that I love painting Godrevy and the miniature easel’s are just perfect for small paintings of Godrevy and I just can’t stop painting them! Luckily people like to buy them, so win win all round.

I have painted them as portrait and landscape, some look towards the lighthouse, and some look towards Gwithian. You will notice that most of them are painted at low tide, mainly because I love to see lots of sand! It reminds me of walking across the beach in the sunshine, looking at the various rock pools. got very ambitious and painted a small version of one of my larger paintings, with the waves crashing against the rocks — and I am quite pleased with the result!

This one was using a different kind of canvas, it is quite thin and didn’t look quite right sat on the easel, so my daughter suggested adding a magnet! It works, so I see a new range of products coming on.

I could carry on posting these little, small paintings of Godrevy, because I just keep painting them! Have a look and see if I have some available for sale, if I don’t then please get in contact with me and I can paint another one!

I hope you enjoyed looking at them, you may also like to look at my other paintings of Godrevy. 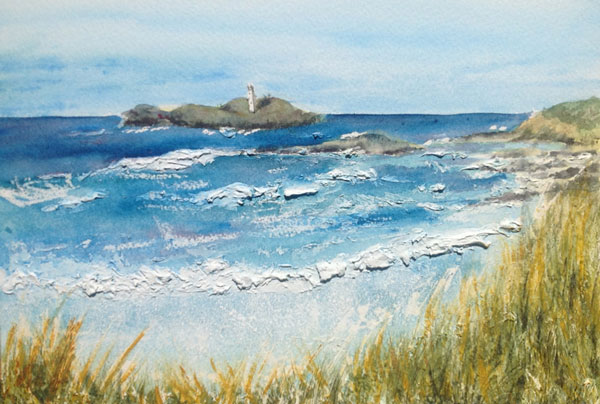 I have been working on, and now finished two further paintings of Godrevy using Gesso to create texture, however this time I have added a little bit of landscape, rather than just focusing on the sea.

The top one one is looking from Godrevy Beach towards Gwithian Beach and Towans.

This is viewing Godrevy Lighthouse from low tide on Godrevy beach.

What do you think, do these images work better with a landscape in it? I personally like them with just the sea, but I have actually sold one of them, and had great interest in the other one, so I could be wrong!

I do find myself quite often painting the same scene, which some people may consider odd or perhaps like a production line but I don’t – I love it!

There are particular places in Cornwall namely Portreath, Godrevy, St Ives, Logan Rock, St Michaels Mount and so on, that I could just keep painting.

You never what you are going to get with Watercolour or even Acrylic, have I mixed the colours in the same way, perhaps used different paint brushes. It is what makes it exciting, how will each painting turn out different!

Then of course I get paintings that I absolutely LOVE. Thank goodness paintings are not like children where you love them all equally, I am allowed to have my favourites, which must include Pedn Vounder Beach at Porthcurno Bay and The Crowns at Botallack.

So if I paint a particular scene then if I sell it, I can’t wait to paint it again!

And I can only paint where I love, so why not keep painting places I love, for example Portreath, just down the road from where I live. Portreath has a variety of scenes to paint, including the harbour; the beach with Gull Rock in the background, not to mention different times of the year (a great spot for summer sunsets) and storms in the winter

Gosh I could just go on and on! P.S. you can click on any of the images to see them larger. 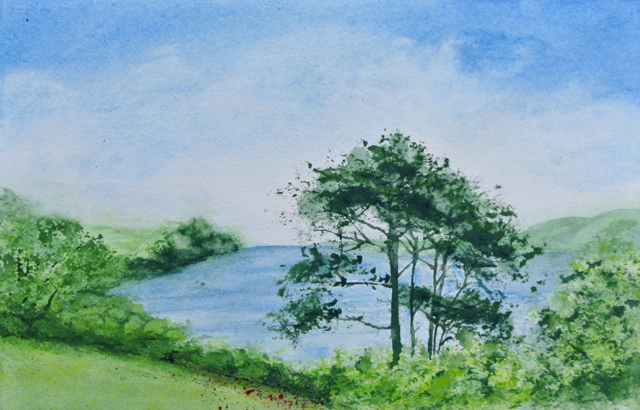 In the space of just three months I had been asked whether I had paintings of the Helford River, and the answer was no! So clearly I needed to do something about it.

The Helford River is quite different to my usual subjects, it involves a lot of green fields and trees. It is a beautiful area and I love to visit but I tend to shy away from any landscape that has a lot of green!

Lastly I decided to use my stippling style, so that I could get more detail. This is the Ferryboat Inn at Helford Passage, which is a favourite spot for families as it is safe for boating, and a lovely spot to sit and watch the world go by!

In the end I think the painting of The Ferryboat Inn was the most successful, but I will do some more as it has given me confidence to paint using green a little more!

I hope you enjoy them. 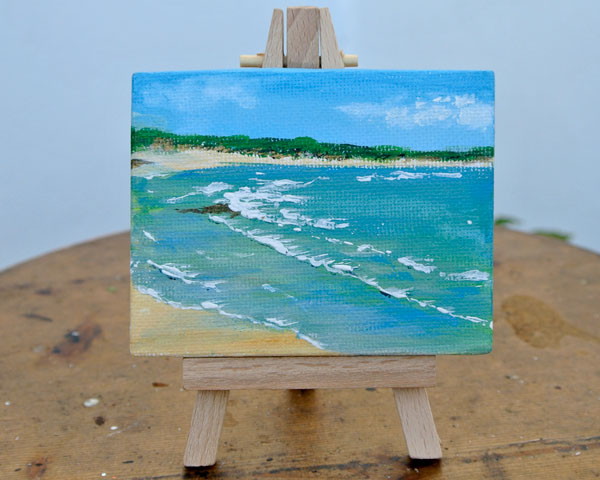 I do love watercolour painting, my website is testament to that, however I have been experimenting lately with Acrylic.

The downside of watercolour is that you have to “protect” the painting, if water or damp gets on the image it can be ruined (or at least altered drastically). That is why it needs to be behind a protective layer of glass, or something similar. This does “push” the price up and I have been trying to think of how to produce a range of affordable pieces of art, have a look to see my acrylic mini easels that are available to buy.

Now I do have my cards, some of which are under £5, they are all originals, but I have seen mini paintings that are little canvases sat on an easel. So I decided to have a play and see what I could produce.

Acrylic paint can be used either like oil paint or like watercolour, but once it is dry it is fixed!

I “Tested” it on my daughter, she likes my paintings but as she lives in a rented property is not allowed to put nails in the walls, this way she doesn’t have to!

Spurred on I painted another – still Godrevy (I do love that place!). I may paint more …have a look at

Poldark has returned to our screens in the UK, a firm favourite with a lot of people. I thought it would be fun to do a blog just of Poldark inspired sketches!

I have for many, many years loved painting Engine Houses as they dot the landscape around my home town of Redruth. In fact Redruth was the financial capital of the Mining area and has World Heritage status, for the role it played.

Let’s start around the St Just area, where most of the filming of the mines was carried out. Incidentally my ancestors worked but I don’t think it was as glamourous as depicted on the TV!

The Crowns at Botallack are stunning in their own right, being perched on the edge of a cliff. These are used as the location for Francis Poldark’s mine Grambler.

This is Chapel Porth, near St Agnes the area is used as Nampara Valley.

Then there is also Carn Calver, near Bosigran.

Holywell Bay – which has featurd briefly but I believe it was used more than once, so watch out for this stunning beach!

Bodmin Moor, and its bleak landscape features in the programme. I believe the farmhouse that is used for the outside shots of Nampara is located here.

Beautiful Porthcurno beach, sometimes being used as Nampara Cove, and Demelza has been seen walking here.

However I have also noticed that Kynance Cove is also being used as Nampara Cove! This is where Demelza was out fishing when she went in labour and Poldark had to rescue her.

There there is the famous shipwreck at the end of series 1, which was filmed at Gunwalloe. However the weather was a lot worse than on the day when I visited!

Category: Complete Paintings
We use cookies on our website to give you the most relevant experience by remembering your preferences and repeat visits. By clicking “Accept All”, you consent to the use of ALL the cookies. However, you may visit "Cookie Settings" to provide a controlled consent.
Cookie SettingsAccept All
Manage consent