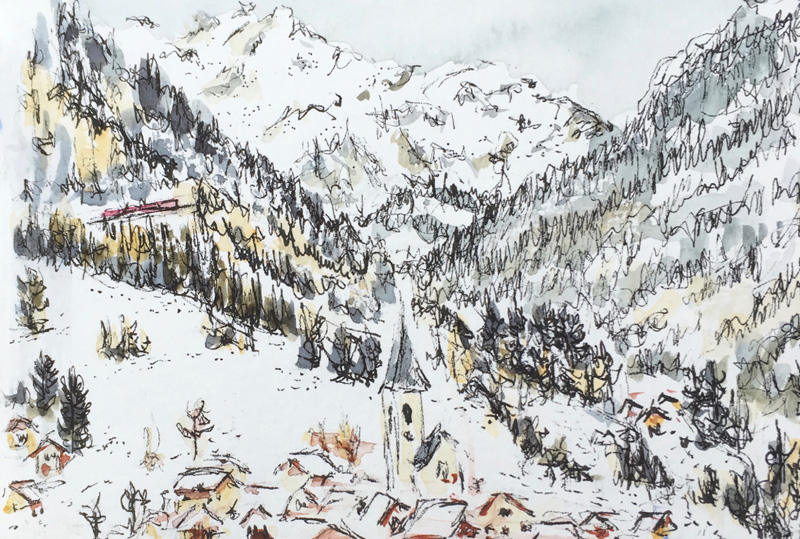 In 2018 we decided to go in search of some snow, not to ski but just to look at and marvel at its beauty, so we decided on Switzerland, where we undertook a mini-tour around this country that we love. Little did we know at the time that whilst we were away Cornwall would end up covered in snow due to the arrival of “the beast from the east!”

As it was ski season we were able to fly from Exeter to Geneva, where we got the train to Basel – our first stop.

It was incredibly cold in Basel, but it was a sunny day and in the sunshine it was glorious and I was able to sit and sketch some of the beautiful buildings.

Next stop was Filisur, going via Chur so we got the train up to Arosa, where it was so cold minus 18 degrees, so not only was it too cold to paint, it was too cold to be outside! Still the train trip up to Arosa and back, going through the snow covered forests was stunning.

When planning our trip I wanted to experience a moutain village and Filisur certainly did that. It was a lovely little village and our hotel room had a full length door/window with a great view over the valley, and we could watch the trains winding up through the mountains to nearby Bergun. If you look at my sketch above, look for the red train. We stayed for a few days, getting the Bernina Express one day to Tirano – where sitting on the train I managed a quick sketch of the nearby mountains. Then we walked to the Landweisser viaduct and as it was so sunny and felt warm, I decided to sit down and sketch the scene. However I became quite puzzled at the strange texture that was being created on my page, until I realised the water on my brush was quickly turning into ice crystals! Then on our last day we woke up to snow, so out came the paints as I tried to capture the scene.

Back on the train – and not just any train The Glacier Express, travelling from Filisur to our next stop at Brig – just magical. Back to painting the scene from our hotel room and this was the mountains at Brig. Our last visit was to Zermatt, where we were hoping to see The Matterhorn, it was quite a coldy day, but the clouds did clearly for a short time and I was able to sit down and quickly capture the scene, where now the temperature was above freezing and so the water in my brush didn’t freeze!

Our trip back didn’t run quite as smooth because by this time Geneva airport was covered in snow, as was Exeter Airport and had been closed the day before and the morning of our flight, but it opened for a couple of hours and we managed to get home!

A truly magical holiday, with memories that will stay with me forever.

Categories: Painting on Location, Sketch work
We use cookies on our website to give you the most relevant experience by remembering your preferences and repeat visits. By clicking “Accept All”, you consent to the use of ALL the cookies. However, you may visit "Cookie Settings" to provide a controlled consent.
Cookie SettingsAccept All
Manage consent