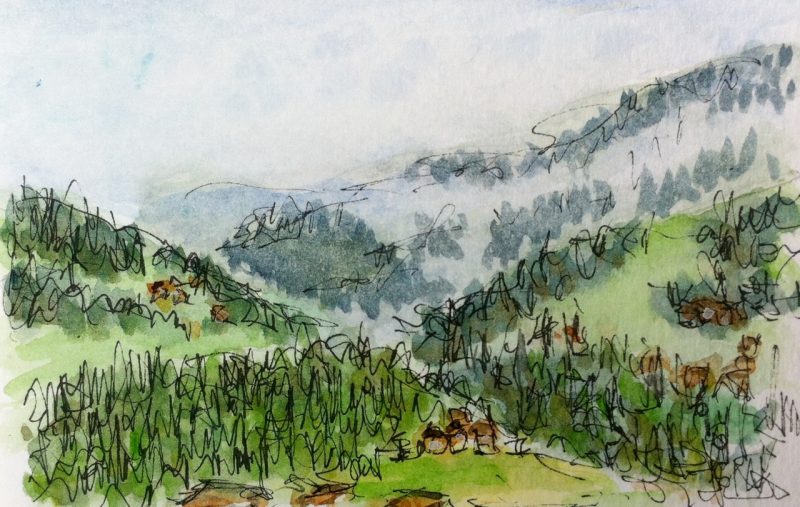 Here are some of my sketches from a holiday in Mayrhofen, during September in the beautiful Tyrol area of Austria, back when we were able to travel freely!

Click on any of the images to see a larger version.

The weather was good during the first half of our week, and the second half was a bit intermittent with some damp in the air. That proved to be great fun trying to still be able to paint!

We travelled, via the local bus, to Hintertux, where by travelling on three cable cars we found the snow! After exploring on the top of the mountain we came down one cable car to Tuxer Fernerhaus, a large restaurant area where we had warming soup and I did a sketch to capture the skiers and cable car. Then after descending two more cable cars we decided to explore the area around Hintertux and found a delightful waterfal, so out came my paints againt!

One of the, looking up the entrance of the Gerlostal valley, was painted whilst at the train station at Zell am Ziller. I had 25 minutes until the next train so I was a woman on a mission!

The last day I found a beautiful spot just on the outskirts of Mayrhofen, which was looking down towards Finkenberg and the surrounding mountains. Well it might have been spitting but I took cover under the trees and managed a quick sketch.

I hope you enjoy them as I enjoyed the holiday.

Categories: Painting on Location, Sketch work
We use cookies on our website to give you the most relevant experience by remembering your preferences and repeat visits. By clicking “Accept All”, you consent to the use of ALL the cookies. However, you may visit "Cookie Settings" to provide a controlled consent.
Cookie SettingsAccept All
Manage consent